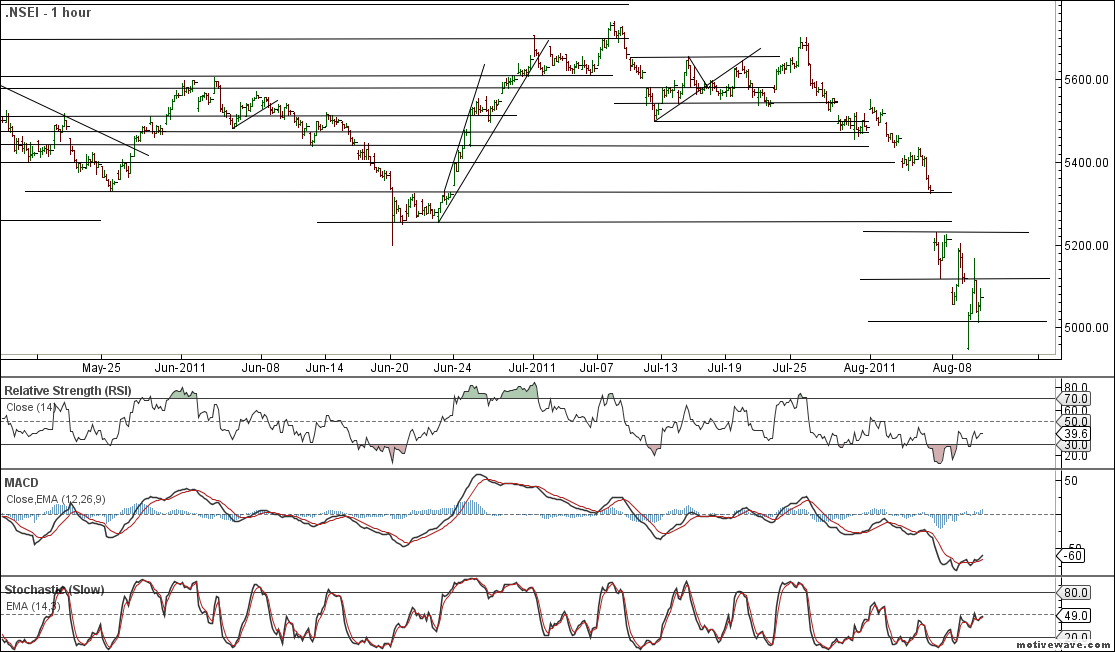 Are We back in 2008 Crash is what every trader and Investor is talking.

1. 2008 there was lack of Liquidity in system right now There is ample liquidty in System

2. It was a credit bubble burst in 2008 People were heavily over leveraged.

3. In 2008 there was Lack of Confidence in Finnacial system but now Investor/Private Companies are not having Faith in Government that they can reduce the debt levels and bring the house in order.

4. So there are no Spending from Comapnies on innovation and Infrastructure which in turn is not spurring employment and hence no economic growth. I strongly feel there will be no Second Dip Recession. US companies are sitting on Record Cash levels.

5. From India’s Perspective All things are falling in place On Hourly Chart the downside momentum has slowed down and a close above 5097 will make hourly positive.

Indicators are turning up but close above 5097 should be seen. On Daily Charts Markets are deeply oversold as fall is straight from 5740-4956 that’s a straight fall of 14% in matter of 10 trading session.

Correction are always a waterfall decline and will never give you a chance of exiting out.

Hope and Pray are the tool traders who are long are left with.

On Daily Charts we are oversold to the Levels of 2008 panic only difference that time fall happened in matte of 2 days and here the fall happen in 5 trading sessions.

Market not willingness to break 5000 is a positive sign and Our markets are not leveraged now in Futures which has been reason why we did not see those 5-8% fall which other Asian markets saw. Nifty Weekly 5110 and 4940 should be held so that we do not fall in waterfall decline or correction mode.