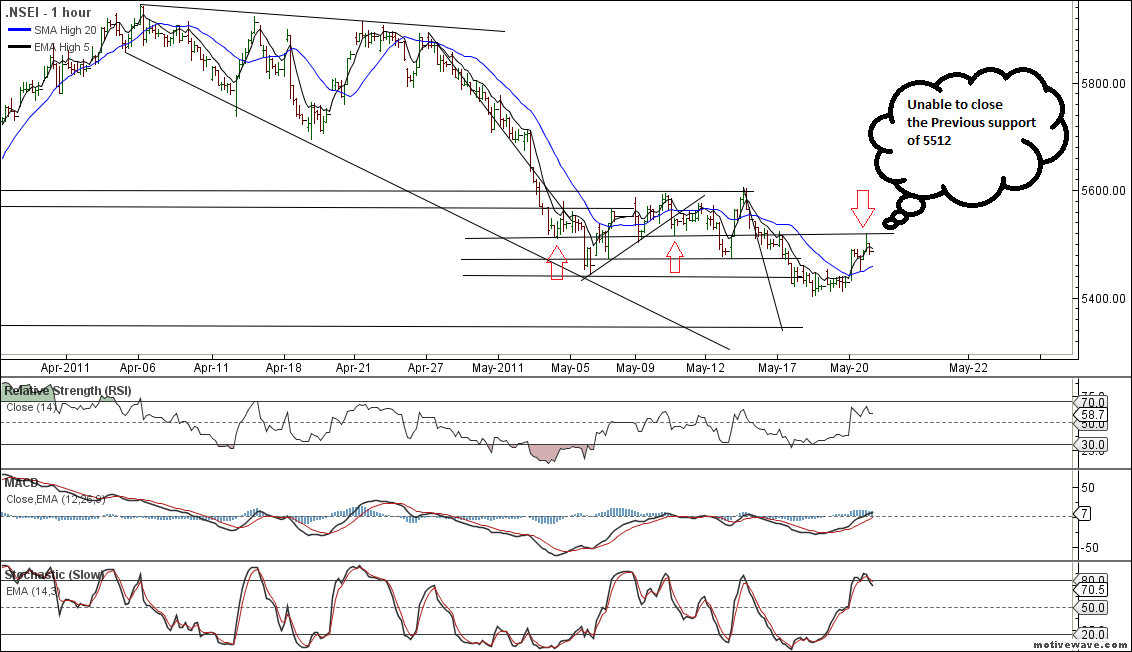 Nifty Hourly chart on Friday was a classical example of Support becoming Resistance in a downtrend. As seen from the above Hourly charts we can observe that 5510-5515 was a support for Nifty during the fall where Nifty consolidated before the fall and now the same support has become resistance during the rise which came in on Friday. Nifty daily chart if we see the Trend line Breakout happened and Nifty is again unable to close above the trendline making it clear that selling pressure which is visible on upside. Every rise is sold into. As we have discussed Flag and Pole Pattern the Breakdown and a swift rally to the Bottom  of flag as discussed it came on Friday.

Bear market rallies are Sharp and Swift and takes everyone by surprise like the rally on last Friday, In first 15 Mins of trade we were up 1% which is a surprise rally. On Daily charts we have done the bearish crossover of 20 SMA and 50 SMA which has bearish implication pointed on Chart. On Weekly Chart after a long time we are seeing a bearish crossover of 5o WSMA and 20 WSMA kind of Bearish Cross which can have serious implication on downside from short term.

Last time the Bullish Crossover happened at 3429 and we saw a very good rally till 6311 now we are seeing bearish crossover which can again bring us down till 5100 in short term. Nifty is closing below 5 Week Low EMA@5508which is again a bearsih sign.

Always Trade  keeping Higher Time Frame in mind. Weekly is still bearish so we are into Sell on Rise.

So Bulls will have to liquidate there positions around expiry which will give the selling in Index.

Watch out for 5593 Level before expiry.