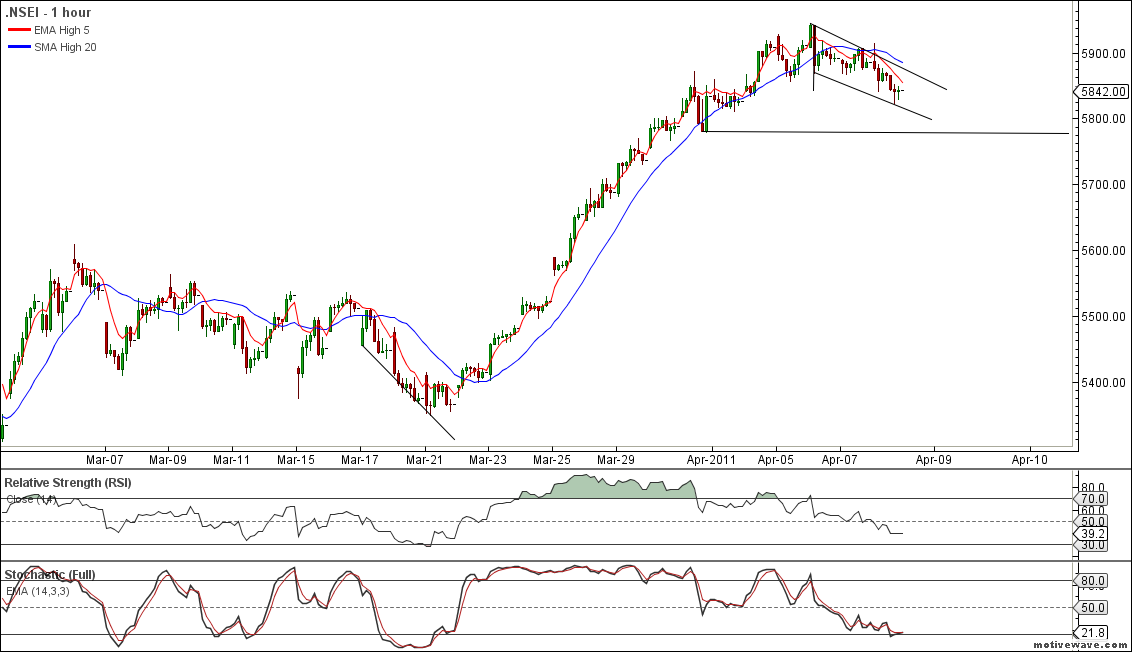 Nifty Hourly chart is giving a SELL call as per our 5 EMA and 20 SMA system.Sell was generated at 5910 levels.Hourly overbought is getting corrected and slowly indicators are moving to oversold zone. On Hourly charts  Nifty is forming a FLAG pattern formation which is low of 5822 is held can move till heigh of pole ie. 68 points. On Daily charts we have broken the daily channel we were trading from 5400 levels which is a bearish indication.

The trendline resistance as shown in previous week is 5940 levels and Nifty made a high of 5944. For any move to come on BUllish end nifty should move up 5945 levels.

As Weekly is still in Buy mode we need to buy on DIPS till 5777 is not broken on closing basis. On Weekly charts we have a Gravestone DOJI pattern which is bearish in nature if next week close is below 5822 levels. Gravestone Doji is formed near a exhaustion uptrend where BULLS take the Index to higher levels but Bears are able to push index to lower levels with selling exceeding the buying. Hence its an indecision b/w BUlls and Bears about the Index further levels.

On Weekly Chart we are still in Buy mode till 5777 is not breached on closing basis.Hence Keep sl of 5777 on long and keep buying on dips till 5777.

NB:-Next week we have only 3 Trading sessions.Hence traders Do not buy and Hold Options because time expiry will let the value decay fast.

How Can one trade in Nifty profitably.

How to Trade using Trading System