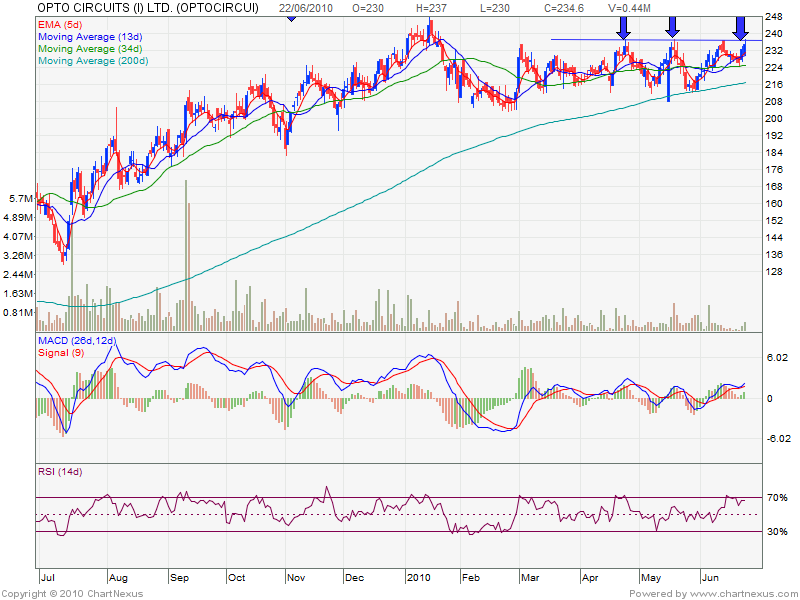 What Is a Breakout?

A breakout is a stock price that moves outside a defined support or resistance level with increased volume. A breakout trader enters a long position after the stock price breaks above resistance or enters a short position after the stock breaks below support. Once the stock trades beyond the price barrier, volatility tends to increase and prices usually trend in the breakout’s direction.

In Stock Market terms a Breakout in a index/Stock Signify moves outside a definite resistance/Support Levels on an increased volume. It’s like a Stock is respecting a particular support and resistance for a period of time and forms a trading range but when there is increase in volume we can see the range breaking on either above resistance level or on support levels.

Once a Breakout happens we may see large swings coming in index/Stock prices with an increased in volatility.

Breakouts are generally classified as a starting of a major trend which may either be bullish or bearish depending on whether support is taken out or resistance.

Breakouts can be result of channel breakouts and price pattern breakouts such as triangles, flags or head and shoulders patterns.

Breakout trading system can be used for

How to enter a Breakout trade

To enter a Breakout trade we need to find a particular stock which has been respecting a particular resistance/support for at least 3 times in the time frame you are seeing charts. Time frame can be intra day,weekly,Daily.

Once you have identified the stock you need to wait for price to close above a resistance level, to establish a bullish position and when prices are set to close below a support level, bearish position can be taken.

To determine the difference between a breakout and a “fake out” following Rules shall be useful.

That may seem like a lot, but that’s the price you pay for safety in a breakout trade set-up.

Booking Profits depends on Traders/Investor Risk Profile So i will not comment on Booking Profit but would say Keep trailing your Stoploss. Opto Circuit is facing resistance at 237 and has not been able to cross it with volumes we can do a short term trade above 237+2% ie around 241 we can initiate longs keeping sl of 237 tgt of 247 which is previous high.