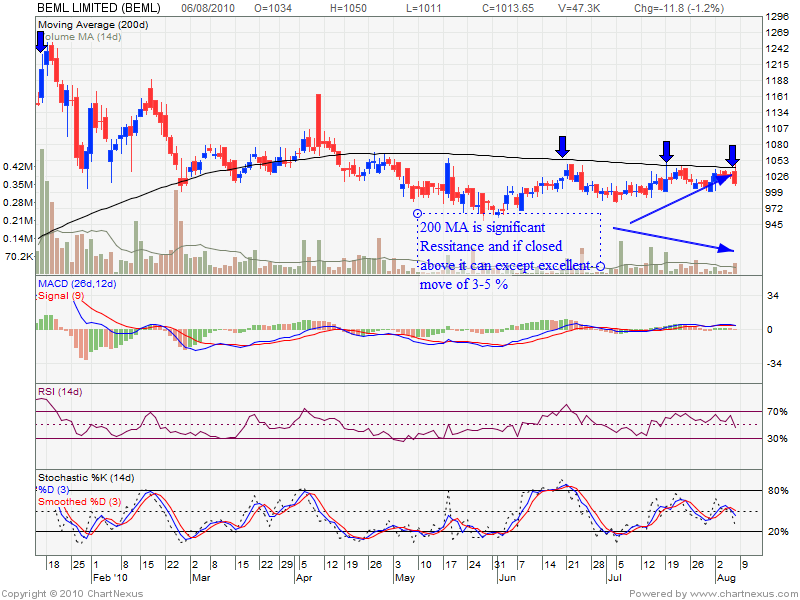 Nifty is doing nothing in past few trading sessions and is slowly and slowly grinding upwards with a positive bias. Support is at 20 DMA which is at 5411 Levels break below that we can see downward bias on Nifty.VIX has closed at all time low and Bollinger Band has contracted almost 70%.Hence we can see some wild moves in Nifty in coming days. BEML  is having major Hurdel at 200 MA as can be easily pointed in the chart. BEML tried to cross 3 times to cross this hurdel but was unable .Stock will give a very quick upmove as soon as it crosses it 200 MA. RSI is taking support at lower trendline and volumes are robust .Close above 1040 pave way for more upside. The stock has been moving sideways and in a narrow range between  Rs 602- Rs630 for three weeks after rallying sharply from Rs 440 to Rs 630. 100-DMA has proved as a hurdle for the stock in the near term.

Move above Rs 622 with heavy volumes would confirm the breakout on the upside and the stock would attempt its 200-DMA, placed at Rs 680 in short term. If we take a close look at the chart I am abl to point out an intresting Observation OF resistance Becoming Support.

HIndustan Dorr was having majot hurdle at 138 odd levels and was unable to cross it for almost 2 times as pointed in chart. Moser Baer is again stuck on Higher End of range with 100 DMA as resistance and on downside taking support at rising Trend line.Stock Once closes above it 100 DMA which is at 68 become technically ripe to make a move till 200 DMA placed at Rs 75 in short term.

In the Chart Section as per many Readers Request I am including all Nifty 50 Stock Intra Chart which will help many of readers while there trading.