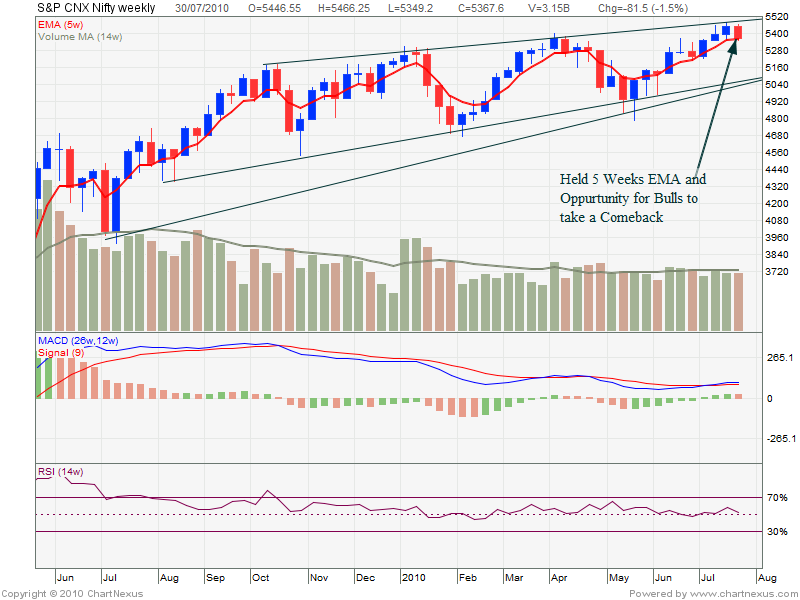 Nifty Closed the Lasst week in red loosing 131 Points and taking support on 5 Week EMA on weekly charts as i have pointed in the chart above.5350 Levels on Nifty has proved to be a good support in past few trading sessions and a break and sustained below it i except a 100 points on Nifty whereas if we are able to cross 5415 in Nifty than we can accept a new highs in offing. ACC Weekly and Daily Charts are attached and Just drawing few lines on Chart and your trades are ready,No rocket Science just find support and resistance on charts.

ACC has been Resisting  the trend line on Charts and coming down as shown on charts.RSI is above 50 suggesting strength in stock and if coupled with volumes it can break the trendline and march ahead. Andrew Yule after 9 days of downfall made a quick upmove  on rising volumes last friday and has moved above its short term moving average in a single trading sessions.All 5% float in market and goverment disinvestment on cards make this stock a good short term buy.Also based on technicals looks ripe for a good bounce in short term.

Remember a Sustained closing above Rs 39 BASF limited has given a 2 weeks sustained close above its breakout levels ie.461 on weekly charts.Stock is trading around its 52 week high and can go ahead and make fresh 52 week high as Momentum is present in this counter.  On daily chart RSI has been consistently trading above 50 mark which also exhibit strength in the counter accompanied with
expansion of volumes during the price rise.

I would like to have a feed back on the calls given here and i would like to make it more interactive so that readrs can also share there ideas and learn Technical Analysis and give and trade on there calls.

As you all know drops of water can fill a pot so lets make this site a platform for your ideas and implement them.

Ideas and Forecasts on NIFTY

Ideas and Forecasts on NIFTY BANK

Habits That Are Essential to Becoming a Highly Profitable Trader-I