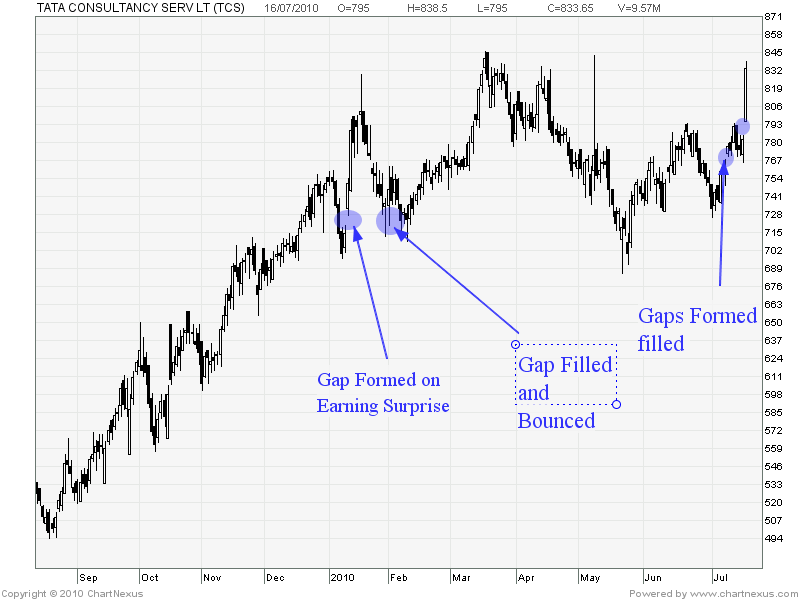 Today as i saw the trading move in TCS on earning surprise i thought of writing on gap trading as TCS you can find many gaps formed.

What is a Gap?

Change in price levels of a stock/index between close and open of two consecutive days. It can also be defined as a pattern where no trading has occurred.Gaps can form in any time frame,mostly are useful for swing traders.

Why Gaps are Formed?

This happens because buy or sell orders are placed before the open that cause the price to open higher or lower than the previous day’s close.Gaps might happen because of earnings surprise,Good/Bad News from management and there are flood of orders either on upside or downside which forces the stock to open either gap up or gap down.
To summarize the above
Opening gaps occur when the opening price “gaps” above or below the previous close.

One of the famous Gap was formed on Nifty was on 20th May 2009 where We opened a Gap up of 20% because of a exceptional news on Formation of India Government at center.

Lets take an example to get more calrity:
I have included the example of TCS. It came out with earning last Thursday and it was a big surprise to market results TCS opens at RS 795 on Friday while on Friday it closed at 782 an opening gap of RS 13.

I have also mentioned the Gaps with a Blue Circle on Daily charts.

Let have a look at opening gap down

Example is of Bharat Forge Stock Closed at 260.3 but the very next day opened at 258.3 and made a void or opening gap down of Rs 2 Now many times of Blogs/Newspaper/Business News Channel most of the readers have heard about of terms Filling the gap.What does this term indicates.Lets again have a look  at TCS chart

In Blue circle i have mentioned the Gaps,there are almost 3 gaps formed by TCS on daily chart.

If we look at first gap which was formed when TCS gaped up from 719 to 728 on some good news and moved up to 800+ levels but it retraced back  in few trading sessions and filled the gap.This is know as Filling the gap.

I have mentioned one more example of Filling the gap in TCS.Quite often, prices will retreat to fill a gap in a bull market before continuing the move. Likewise, prices often rally in a bear market to fill gaps. All gaps are filled is not a trusim,Sometime gaps are never filled for years as The gap Nifty has formed on 20th May 2009 and till now it has not filled.

For trading purposes, we define four basic types of gaps as follows:

3 thoughts on “How to trade Gaps”