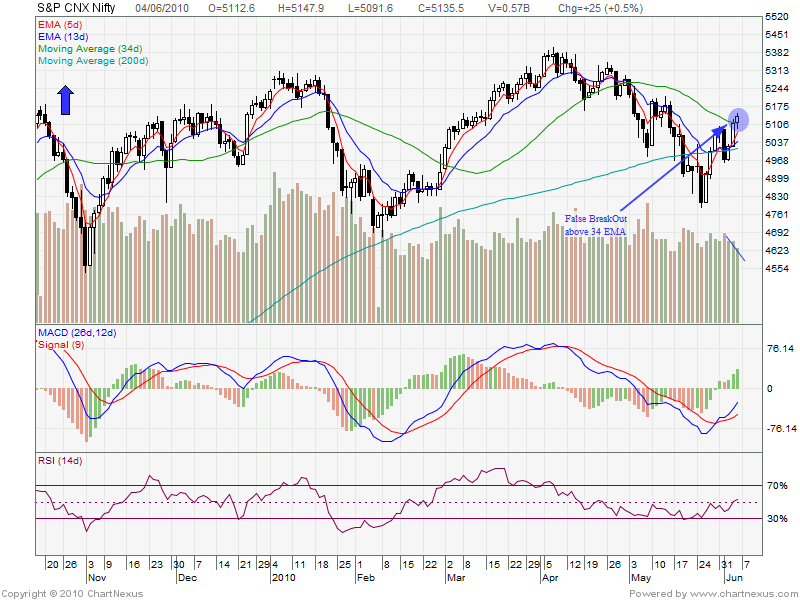 As seen from the attached daily chart we did a break above 34 EMA and triggered SL for many longs also as discussed from last week Nifty Technical View 5110 was trend line resistance and above that we can move till 5190 Levels we did move to 5147 levels but as Non Farm Payrolls came pretty bad and dow tanked  3% and we should accept a huge gap down and probably we may open sub 5000 levels. As seen from the attached chart we are seeing a formation of Inverted Head and Shoulder Pattern on Daily Chart.

A Peculiarity of Inverted Head and Shoulder pattern is that after touching the Neckline which is placed around 5150 Levels there is a sell off which allows bulls to enter.

Now for this Pattern to get validated we should see a bounce from or around 4965 levels.If at 4965 we are unable to cap the downfall than we are in through  a big fall.

On weekly charts we are seeing an overbought condition on hourly charts with a negative divergence and the channel bottom lies around 5030-40 levels and 200 SMA also lies around 5020 levels.So we have multiple support in this range on weekly closing basis.

Also as seen from Nifty Options Open Interest we have a heavy build up at 5000 PE so this should prove to be support for tomorrow fall even europe opens in red we could see more panic selling coming in,Keep a track on weekly supports.