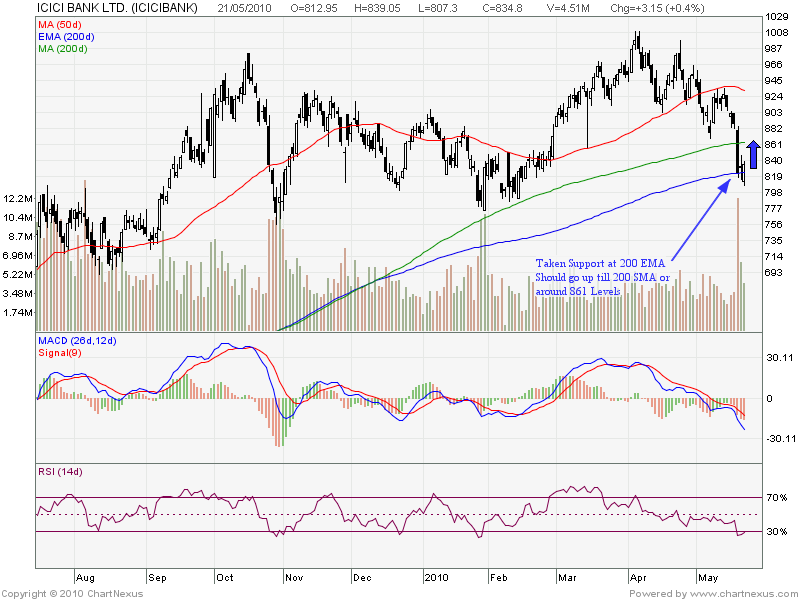 After breaking the crucial 200 SMA support stock was pounded by bears and than came the BOR news which gave more reasons for bears to pound the stock.Now we are having a good support at 200 EMA .Stock held support of 810 for 2 days and looks like there is strength is emerging in the Stock.

Technical Indicators MACD and RSI are in overbought zone and a Bounce back from lower levels is accepted. ABAN Offshore:Traders Nightmare and Stock which can either make you a millioaire or take off your shirts and pants.

Stock has formed double bottom at 650 Levels and distress selling has ocuured partly coz of the Sinking news of Rig and was technically very weak.

Bounced Back Strongly from the double bottom levels of 650 Indicators look over sold and we can see a retracement till 23.6% levels is possible which is around 900.But need to trade above 5 EMA for at least 2-3 days before we can see those levels in medium term. Sterlite Industries:Stock got hammered from 900 Levels came down till 650 levels on Bonus news and cooling off of commodities in China.At 622 levels it has formed a double bottom indicators are in oversold territory and showing positive divergence.An ideal scenario to take long and see the stock retracing back to at least 684 levels.