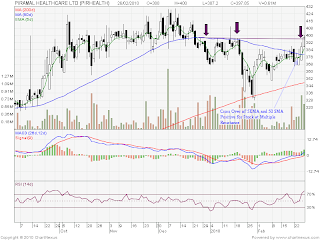 In the recent advance of 2009, it thrust above that zone and now in the consolidation zone above that mark. As per the last two weeks price rise, it has formed the fresh buying pivot while the supporting oscillators are also confirming further up move in the near term. So one can accumulate in a range of 380-390 levels with closing below stop loss of 365 levels for the targets of 440-460 levels.Big resistance at 395 levels as mentioned in charts.