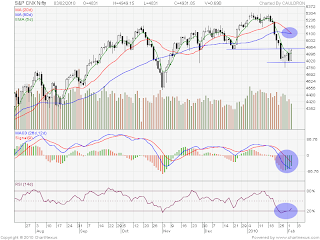 Nifty after making a low at 4814 for 3 days in a row than feeling Resistance now at 4950 levels,As a common saying in Previous support become resistance it is proved again in charts shown above.But it would be a good to be on long side as FII bought heavily in Index Futures today in tune of 2300 cores and around 400 cores in cash and Dow is also So technically system remain ripe for clearing the elsuive levels.But will it be able to sustain that? I think yes let market tell