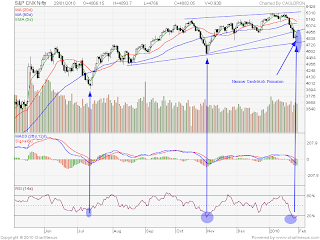 Nifty daily charts are attached her by

1. Nifty has for formed a Bullish Hammer Formation

2. The significance of this pattern will be confirmed on Monday if we see a white candle or nifty opening gap up and sustaining that move.
3. Nifty futures has left a bear gap between 4976 and 4964. This gap may prove to be a strong resistance to cross. Similarly, the low of 4801 made on Nifty futures on 27th November 2009 should act as a significant support to markets for now.
4.We can see a pre budget rally till levels of 5200 if the above mentioned levelsr are crossed.
5.RSI is in oversold region as shown in the charts,as mentioned in previous crash also where RSI reached the lowest level and than we have seen a decent bounce.
6.As the fall have been sharp we will see an equal and unbridled pull back. 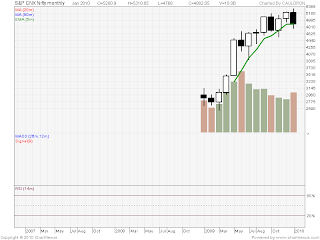 AS seen in monthly charts Nifty has never been below 5 Month EMA and it act as a major support and a we see a decent pullback from this levels same case is happening now.Better is to exit shorts and take longs with sl as 4770