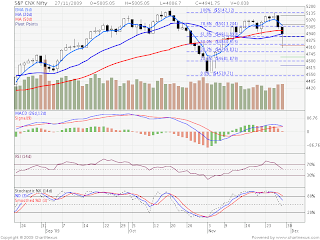 Nifty has closed below 5 EMA after phenomenal after the European opening and saw a good recovery.

Now as per my TA you we have closed below 5 EMA which is at 5012 and 71.6% retracement also as show in charts attached above.

We can see rally tommorow as asian markets should open higher but if 5012 above are not sustained than we can again down to a levels of 4700
4920 which is 20 SMA hold the key below that we will again enter in a downtrend.

Weekly Levels to be watched.