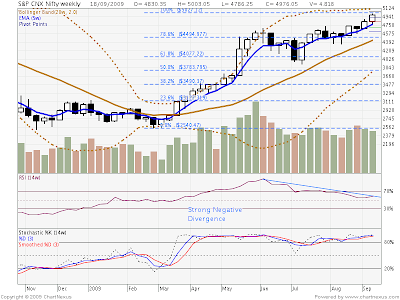 Nifty continue its upward journey and scaled 5k Mark which was an elusive level from 28 May 2008.FII are on buying spree from past 2 sessions Is this the moment of irrational exuberance which is again visible in the Indies.Small Caps and Mid caps running like there is no tomorrow.Well this is a liquidity fueled rally and Bears were slaughtered.I have to admit i too was short and my stops were taken out.But now the Risk to Reward Ratio is Favor of Bears again.Upside is capped till 5150 as per my analysis.Looking at the Weekly Charts one can Easily see the Huge Negative Divergence seen in RSI Well RSI is negative from past 3-4 Weeks but market is still going up so i would advise readers to be cautious and i will not be amazed to see a Big Red candle in coming days.Well on thing TA through out the World are amazed is too see a Drop in intra day volatility.It is just one way ride. 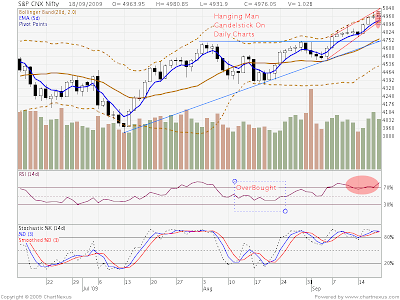 Well Now lets have a look at the Daily Charts

On Last Friday we made a Hanging Man Candlestick on Daily Charts.

Def of Hanging Man:
The Hanging Man is a bearish reversal pattern that can also mark a top or resistance level. Forming after an advance, a Hanging Man signals that selling pressure is starting to increase. The low of the long lower shadow confirms that sellers pushed prices lower during the session. Even though the bulls regained their footing and drove prices higher by the finish, the appearance of selling pressure raises the yellow flag. As with the Hammer, a Hanging Man requires bearish confirmation before action. Such confirmation can come as a gap down or long black candlestick on heavy volume.

Now lets have a look at Daily Charts: Channel in which we are now has support at 4920 and top around 5133.

Trend line support around 4720-43.Any close below that would be a party for bears