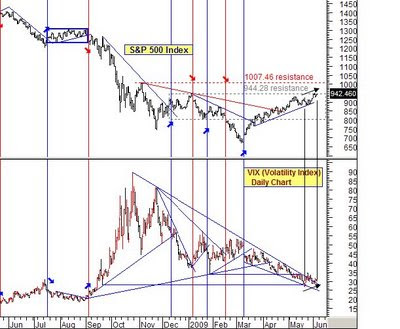 Often times, you may have noticed that we point out market conditions that are showing a “Divergence”.

What are divergences and why are they important?

Market technicians consider a divergence to be either positive or negative. In both cases, these divergences are considered as warning signs, or the possibility of a major price shift being around the corner.

A positive divergence occurs when the price of a security makes a new low while an indicator starts to move higher. A negative divergence occurs when the price of the security makes a new high while the indicator starts to move lower. (Since an inverse indicator like the VIX already moves in the opposite direction to be in consensus, moving in the same direction for the VIX would be a divergence.)

You may recall our concern about the VIX on Tuesday. At that time we said, ” On yesterday’s (Monday’s) strong up day, the VIX should have moved lower (the VIX moves opposite to the stock market). Instead, the VIX closed higher.”

For the VIX versus the S&P 500, this was a negative divergence. For the VIX it was an abnormal behavior.

If you look at the two black arrows I drew on the chart below, you have your answer. The S&P 500 moved higher in the past 10 days. Since the VIX (Volatility Index) moves opposite to the S&P 500, then the VIX should have moved lower.

Upon inspection, you can see that the VIX did not do that, instead … it moved UP during the last 10 days. This was a negative divergence. There was another negative issue about the VIX’s level yesterday … can you spot it?

The answer: The VIX closed above a 7 month resistance line. That is a negative. It actually has been hugging the line, so it has not gone out of control yet. None-the-less, it is a warning sign that one should proceed with caution because “something is going on”.

This was the S&P Perpective.Now turning the eyes to our Own market and look at what picture is emerging.As u can see from the Picture below when using the ROC as an indicator it is showing Negative divergence on EOD charts 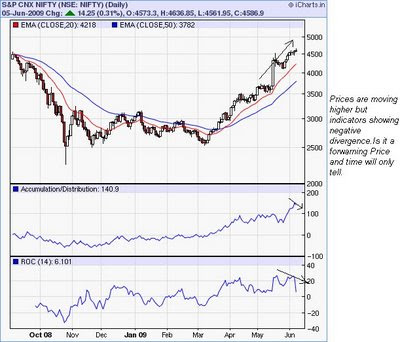