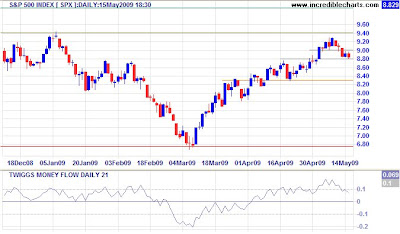 The S&P 500 retreated from strong resistance at 940 and is similarly consolidating in a narrow range on low volume. Reversal above 900 would signal another test of 940, while breakout below 880 would test 830. In the longer term, the bear rally is expected to fail. Twiggs Money Flow (21-Day) reversal below zero would warn of a correction to test primary support at 675. Penetration of resistance at 940, however, would give a weak (primary) up-trend signal. But readers should beware of a bull trap.