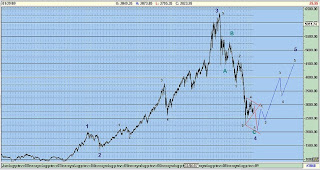 The Nifty (Sensex) is in the process of completion of its correction from the 6200 (21000) levels. It seems currently to be in a
contracting triangle formation (lower tops & higher bottoms), the chances of which favour a downside breakdown with target marginally
south of 2000 (7000). This move should happen by April 2009.
Broader moves occur in a 5 wave sequence marked 1-2-3-4-5 with 2 correcting 1 and 4 correcting 3. Corrections happen in a 3 wave
sequence marked as A-B-C.
We presume we are currently in wave 4 of C of the bigger wave 4. The bigger wave 4 is the correction of wave 3 from 2003-2008 which
created a high of 6200 (21000). This will comprise of the A-B-C sequence . Wave A and B have already been completed (refer chart ) .C
will comprise of 5 waves of which 1-2-3 are complete, 4th is in progress and 5th to follow. Wave 5 is likely to take the Nifty (Sensex)
down to around 2000 (7000) levels. This five wave sequence would complete the correction A-B-C (as shown in chart) .

The move to follow this downside will be a Five wave upmove. In the upmove we would expect the Nifty (Sensex) to reverse 50% –
62% of the entire fall from 6200 (21000) to 2200 (7700) (or a new low if created by April). By either calculation a minimum move to
around 4500 (15000) levels look possible. Timewise this should be possible in one year. This would make equity investments very
worthwhile.

The more aggressive could initiate protected shorts now to take advantage of the near 20% fall that we expect. They could go long at
lower levels.
Longer term investors could make staggered investments from current levels as the mid term market move is likely to provide decent
returns to all investing hereon.
Broadly despite our near term bearish outlook, we remain fairly optimistic on the prospective returns from equity for the year.

Compiled from a Brokerage Report