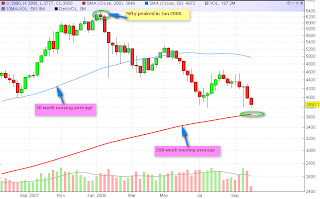 Now lets look at weekly chart of Nifty in 2008; and try to spot similarities between what happened in 2000-2002 and what scenarios can play out now.

4.There was 20% bounce after market touched 200 week ma and it happened during Oct-Feb which is good period of equities.

5.The market then tumbled below 200 week moving average in March 2001.

6.The market sharply tumbled 30% on break below 200 week moving average.

7.Time Correction – It took 29 months for market to recover once market slipped below 200 week ma. It was a painful slow recovery

8. The bull market resumed when market finally broke out above 200 week ma

5.The next wave of correction may come in Feb-March 2009 just before elections and market can slip below 200 week ma

It means we may see a strong bounce in next 3-4 months before we see another sharp correction.