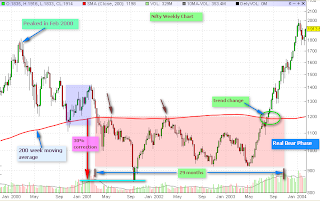 Global markets are in midst of a severe sell off. We are in a terrible bear market, and the question we need to ask – Is this the repeat of bear market of 2000-2002?

The answer is may be YES.

There is amazing similarity you can spot on charts between what is happening now and what happened in 2000-2002. The image above is the Nifty weekly chart of 2000-2002 period –

As you can see in the chart above, the 2000-2002 bear market was not only painful in terms of price correction but also time correction. Here are some facts –

o It then took 8 months for the market to slide to 200 week moving average. The price correction was 36% and it happened between Feb 2000 and October 2000.

o The market then bounced back from 200 week moving average – 20% bounce. This was Oct-Feb period – generally good period of equities

o The market then tumbled below 200 week moving average in March 2001.

o Time Correction – It took 29 months for market to recover once market slipped below 200 week ma. It was a painful slow recovery.

o Every rally below 200 week ma got arrested at 200 week ma during those 29 months of recovery.

o The bull market resumed when market finally broke out above 200 week ma in August 2003.