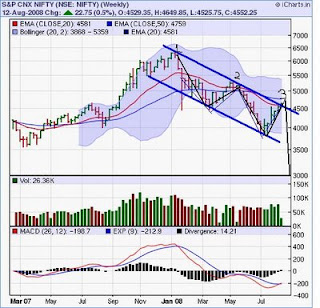 This pattern started at the end of bull cycle making top at 6357 on jan 08 after completing 1st downwave at 4448 , the retracement wave was completed on 02 may at 5299 . The next major wave started from 5299 larger than jan fall till 3790 in month of july , Now we are in the retracement wave which has target of 4722 the 61.8 % retracement level as mentioned in my earlier posts also

Now according to this pattern ( elliott wave theory ) , the up rally is about to end …….yes this rally can be stretched to 4850 -4927 lvl by formation of extended waves which is quite possible , but the downwave sfter ending of this wave would more larger than last wave , which can possibly take nifty to 3300 or 3157 which is can be called as 50 % correction according to 8 year cycle n then lead to 62.5 % correction lvl at 3000 mark , where the correction may be completed according to theory.